Taiwan’s COMPUTEX trade show is always a must-attend event, and though it’s virtual this year, we still had plenty of gaming announcements. Watch the keynote replay for all the gaming news or read on below.

With these and other GeForce RTX graphics cards and laptops, ray tracing and/or DLSS can be used in over 130 games and apps, including DOOM Eternal, Red Dead Redemption 2, Rainbow Six Siege, Icarus, LEGO® Builder’s Journey, DYING : 1983, The Ascent, and The Persistence, which are all adding RTX technologies in the near future.

With new academic terms fast approaching, it’s time to gear up with a laptop capable of accelerating your course work in 70+ creative and design apps loaded with NVIDIA DLSS, ray tracing and AI enhancements. GeForce RTX laptops deliver the fastest performance in these apps, and in games, and there are over 140 ultra-thin and light laptops suitable for every need.

Learn more about each of these announcements, as well as others, in this roundup of NVIDIA’s COMPUTEX 2021 news.

The NVIDIA Ampere Architecture, with 2nd generation RT Cores and 3rd generation Tensor Cores, is our greatest generational leap ever. And for some time, the 80-Ti class of GPUs has represented the flagship of our gaming lineup.

The GeForce GTX 1080 Ti, released in 2017, could tackle all the games of its time. But this well-loved GPU simply can’t keep up with the demands of modern games. Last-gen’s successor, the GeForce RTX 2080 Ti, was introduced as the only way to play in 4K with RTX ON. But the production value of games marches forward, and titles like Cyberpunk 2077, Borderlands 3, and Watch Dogs: Legion have elevated realism, demanding even more of the GPU.

Our newest gaming flagship is the GeForce RTX 3080 Ti. Launching June 3rd with prices starting at $1199, it’s 1.5X faster than its predecessor, and 2X faster than the GTX 1080 Ti in traditional rasterization at 4K. 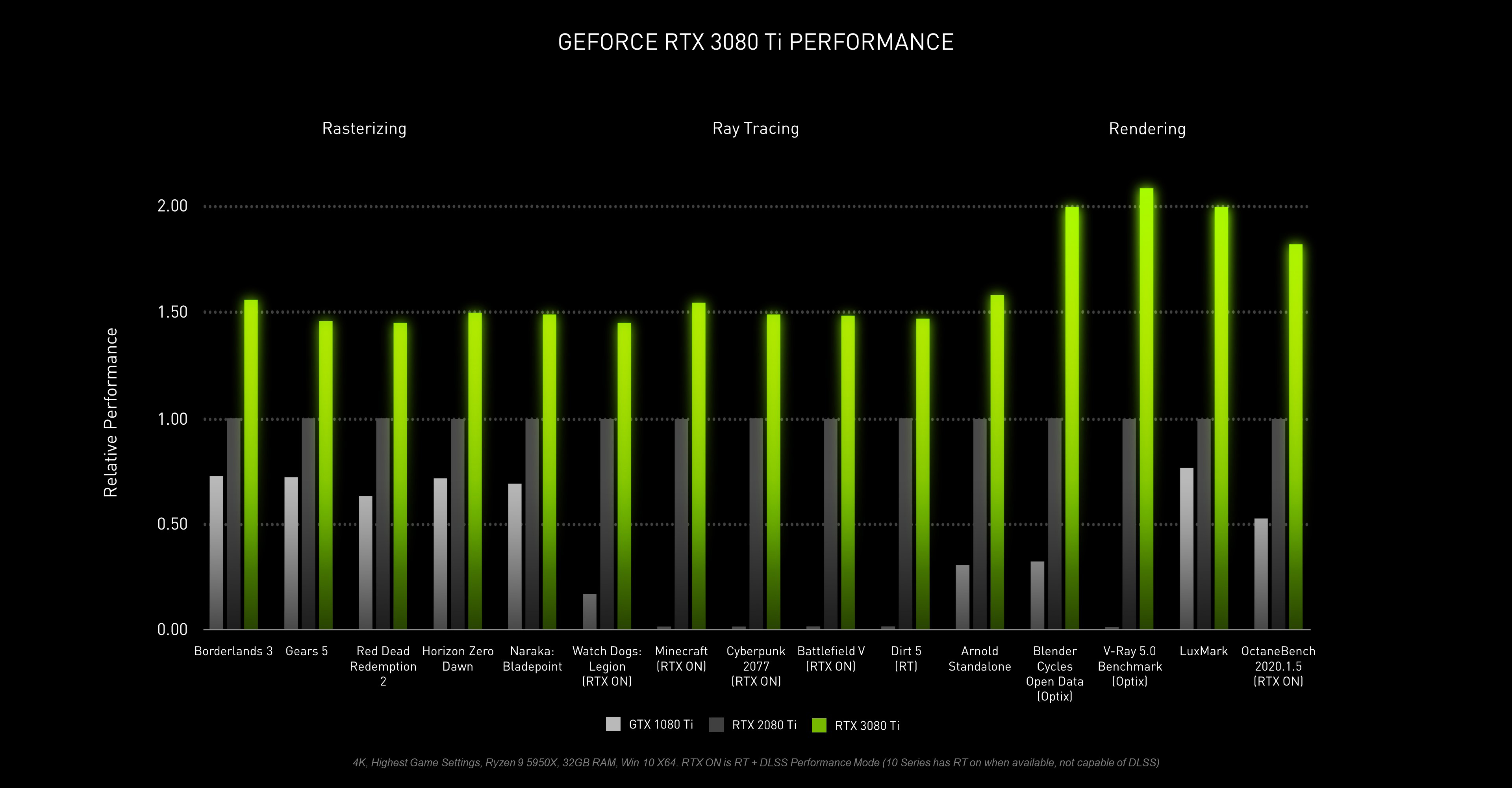 The GeForce RTX 3080 Ti’s power comes from 34 Shader-TeraFLOPS, 67 RT-TeraFLOPS, 273 Tensor-TeraFLOPS, a 384-bit memory interface, and 12GB of ultra-fast GDDR6X memory. These leading-edge hardware specs are supported by our complete range of game-changing features, including the incredible NVIDIA DLSS, which boosts performance by up to 2X.

To date, the GeForce RTX 3070 has been our most popular NVIDIA Ampere Architecture GPU. Now, we’re supercharging it with more CUDA Cores and superfast GDDR6X memory, creating the all-new GeForce RTX 3070 Ti. 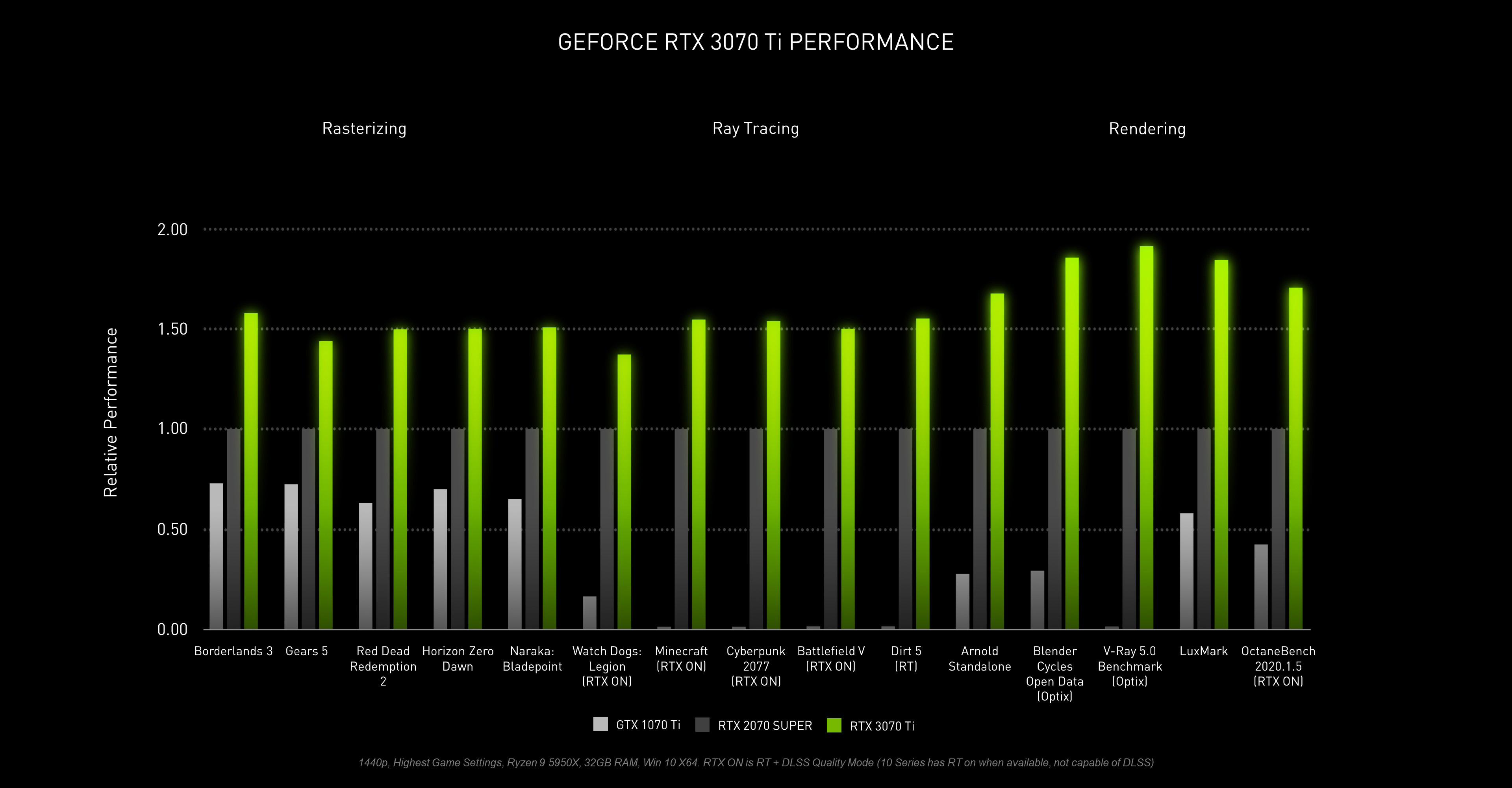 Both graphics cards will be available for purchase as custom boards — including stock-clocked and factory-overclocked models — from top add-in card providers such as ASUS, Colorful, EVGA, Gainward, Galax, Gigabyte, INNO3D, MSI, Palit, PNY and Zotac. And limited-edition NVIDIA Founders Edition boards will also be available. Learn more in our announcement article. 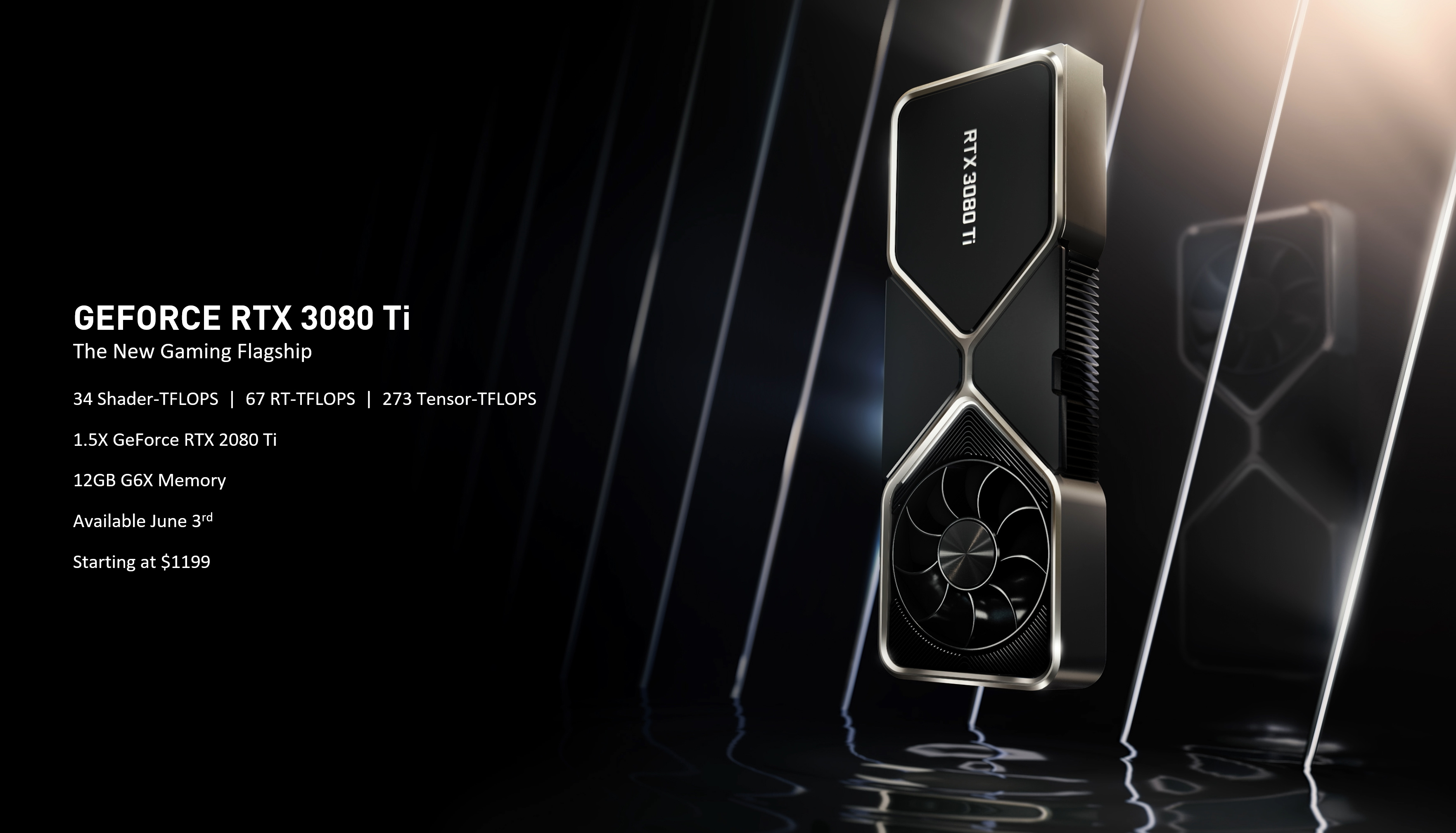 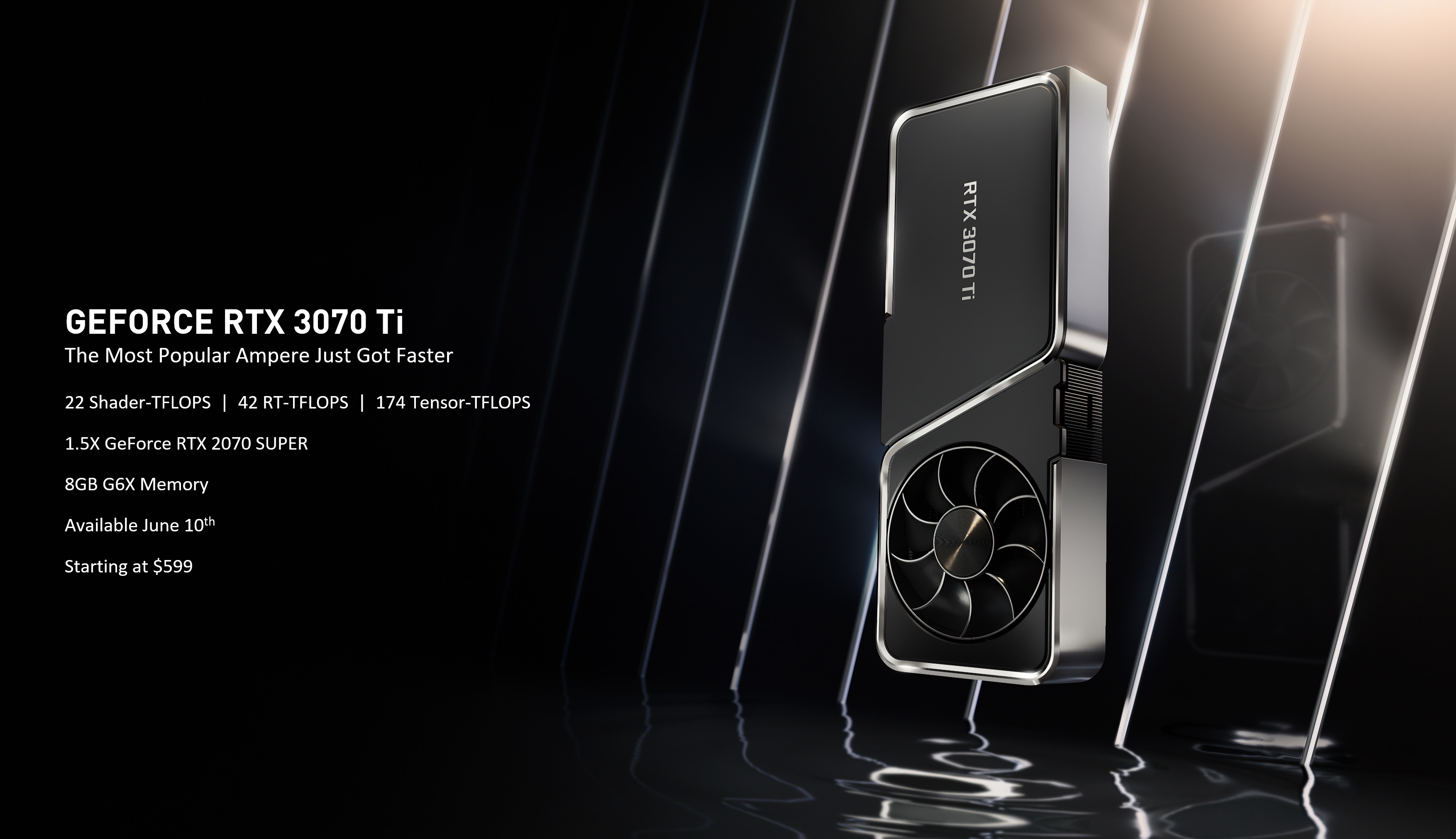 Ray Tracing, NVIDIA DLSS and GeForce RTX-accelerated AI technologies are being adopted by developers with unprecedented speed, faster than any other in NVIDIA’s history. Already, over 130 games and applications feature RTX support, including the #1 battle royale (Call of Duty: Warzone), the #1 best-selling game of all time (Minecraft), the #1 photography app (Adobe Photoshop), the #1 video editing app (Adobe Premiere Pro), the #1 broadcast app (OBS), both leading game engines (Unreal and Unity), and every major 3D renderer. 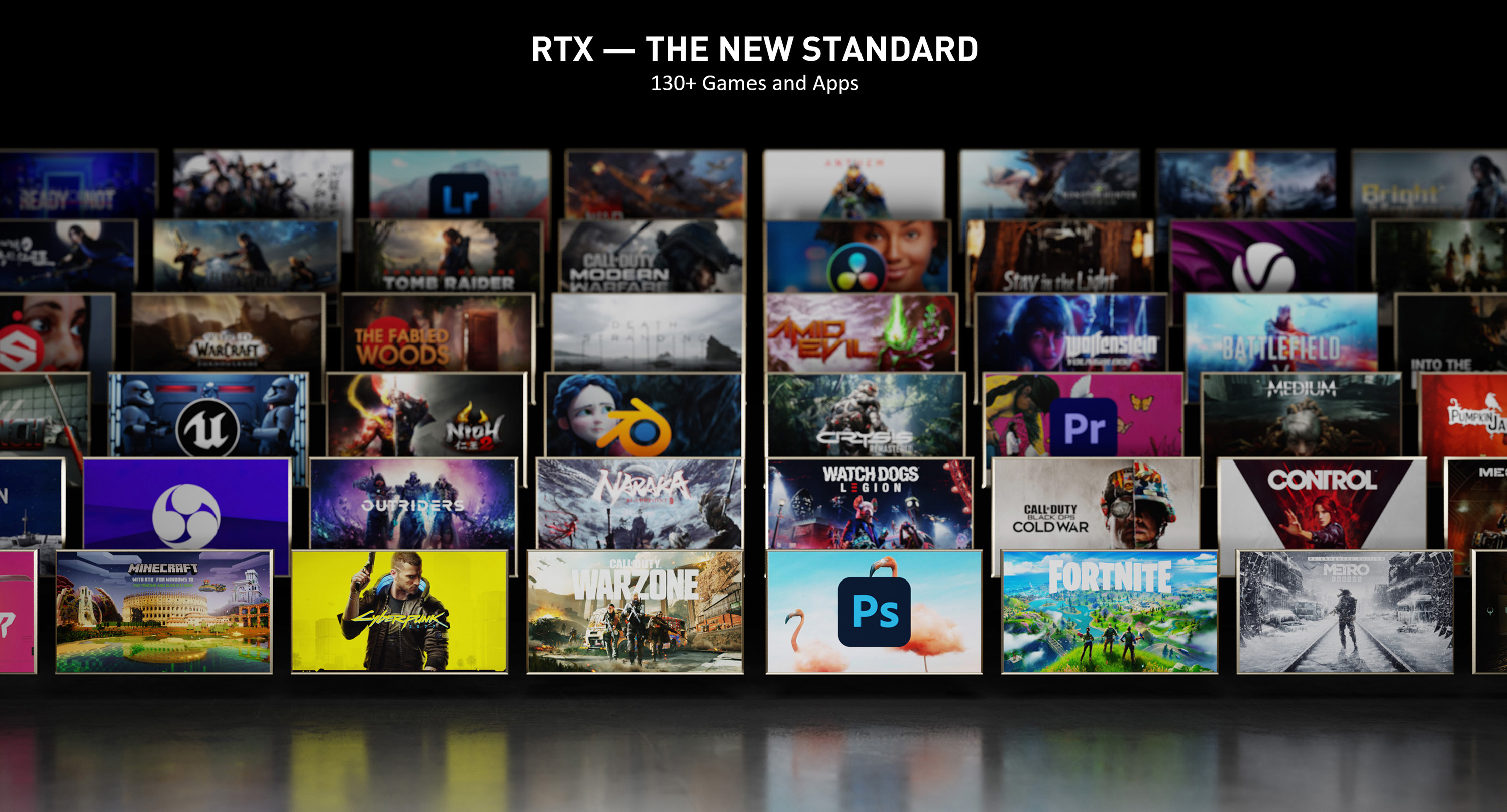 Each month, more developers add these RTX features to existing releases and upcoming products, and at COMPUTEX we’ve revealed that RTX technologies are coming to DOOM Eternal, Red Dead Redemption 2, and Rainbow Six Siege, three of the planet’s most popular games. 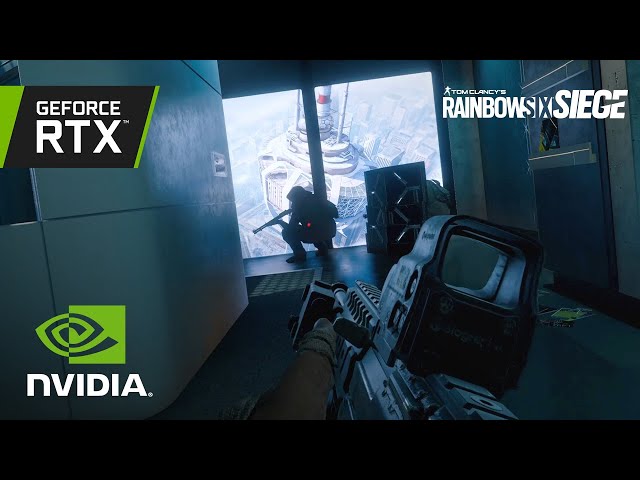 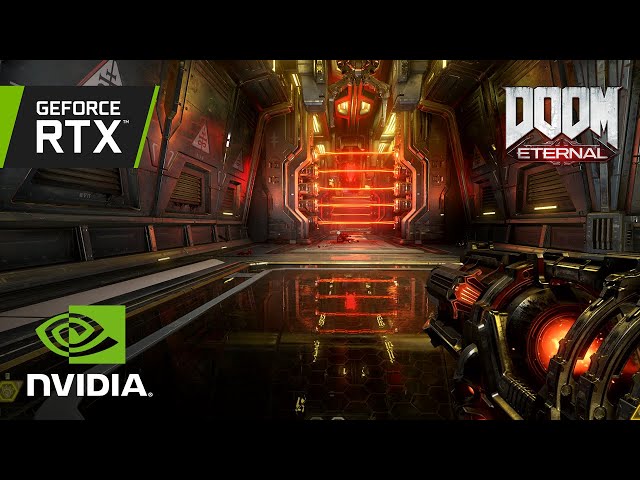 RTX technologies are also coming to Icarus, LEGO Builder’s Journey, DYING : 1983, The Ascent, and The Persistence, and have recently been announced for Virtual Reality games, including No Man’s Sky, Into The Radius, and Wrench. 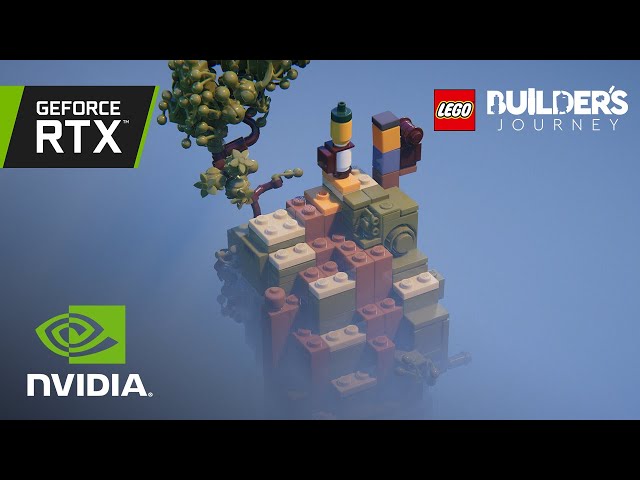 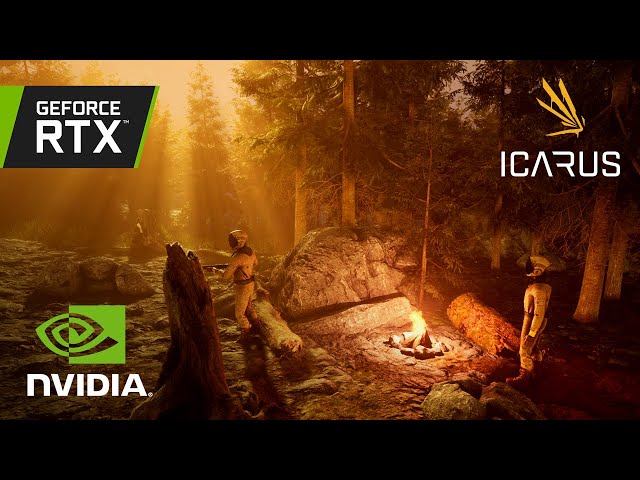 With ray tracing and NVIDIA DLSS, GeForce RTX gamers get the definitive experience on desktops, laptops, and in the cloud on GeForce NOW. Check out our new games announcement article for further info.

And via the NVIDIA Studio program, we work with top creative application developers. RTX acceleration brings heightened performance and game-changing features, giving creators more time to do what they do best, create.

75% of GeForce gamers play competitive titles, such as Apex Legends, Call of Duty: Warzone, and Valorant. In each title, the difference between winning and losing is a matter of milliseconds, spurring us to create NVIDIA Reflex, a feature that reduces system latency by 20 milliseconds on average. With reduced system latency (a.k.a. input lag), your mouse clicks and actions occur faster in-game, making you more competitive.

90% of GeForce gamers use NVIDIA Reflex in the 16 games that are already supported, and now we’ve announced that Reflex is coming to Escape From Tarkov, War Thunder, CrossFire HD, and NARAKA: BLADEPOINT. 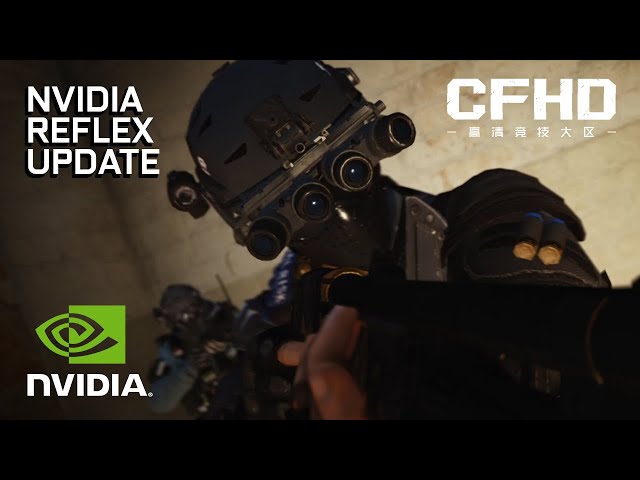 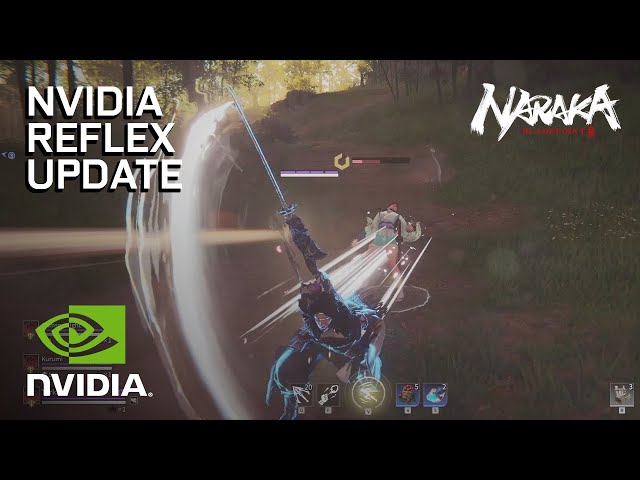 Soon, 12 of the top 15 shooters will feature NVIDIA Reflex, making GeForce gamers the most competitive on the battlefield.

If you’re especially competitive, or are an esports pro, you’ll want to measure your system latency to ensure your system isn’t holding you back. In the past this was virtually impossible, but now there’s the NVIDIA Reflex Latency Analyzer. In concert with supported G-SYNC gaming monitors and mice from an ecosystem of partners, and GeForce Experience’s free software, gamers can measure end-to-end system latency, from click to photon.

At COMPUTEX, we announced that EVGA, Lenovo and Viewsonic have joined the list of partners upgrading new and existing mice and G-SYNC monitors with Reflex Latency Analyzer support. 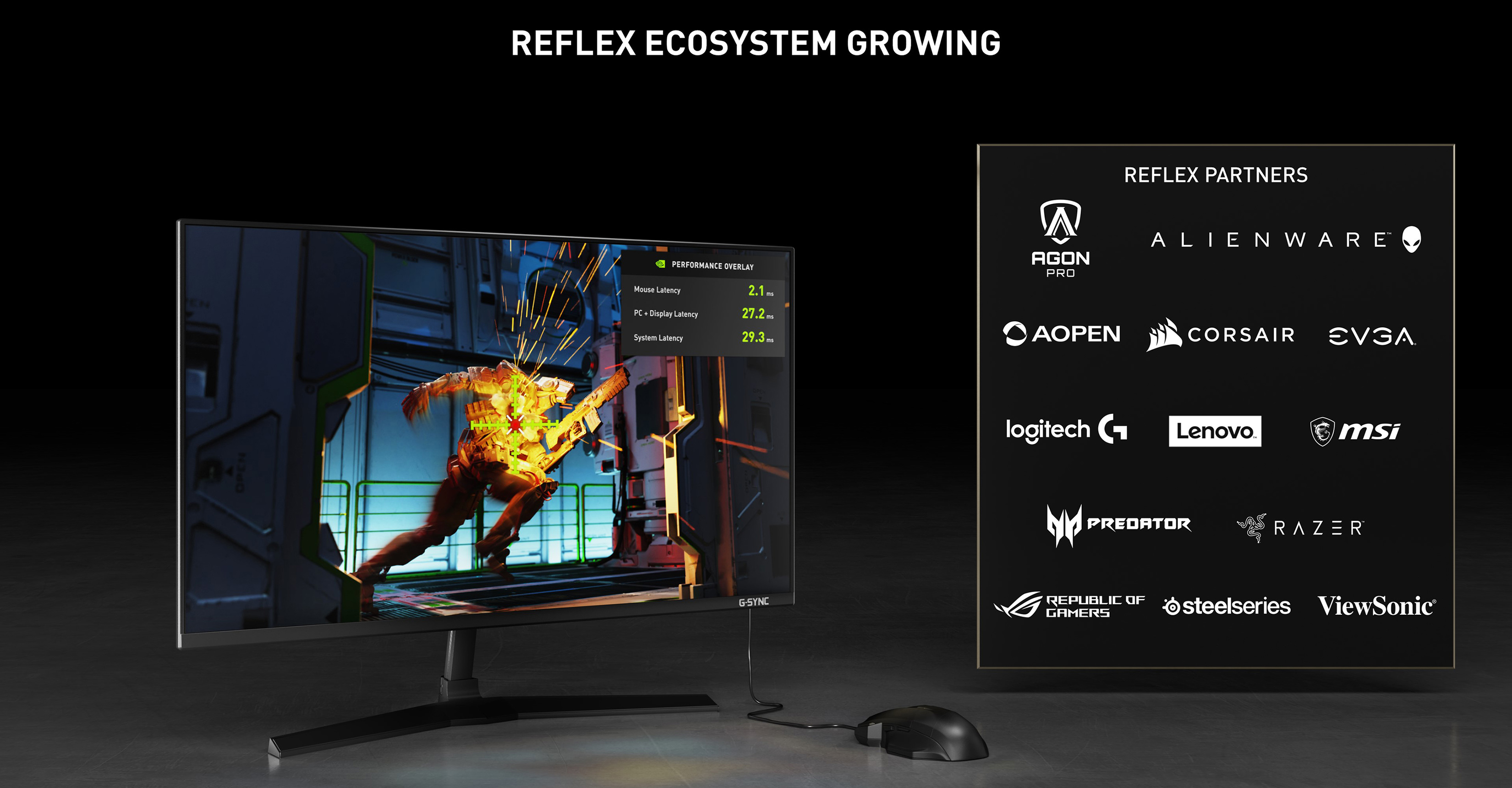 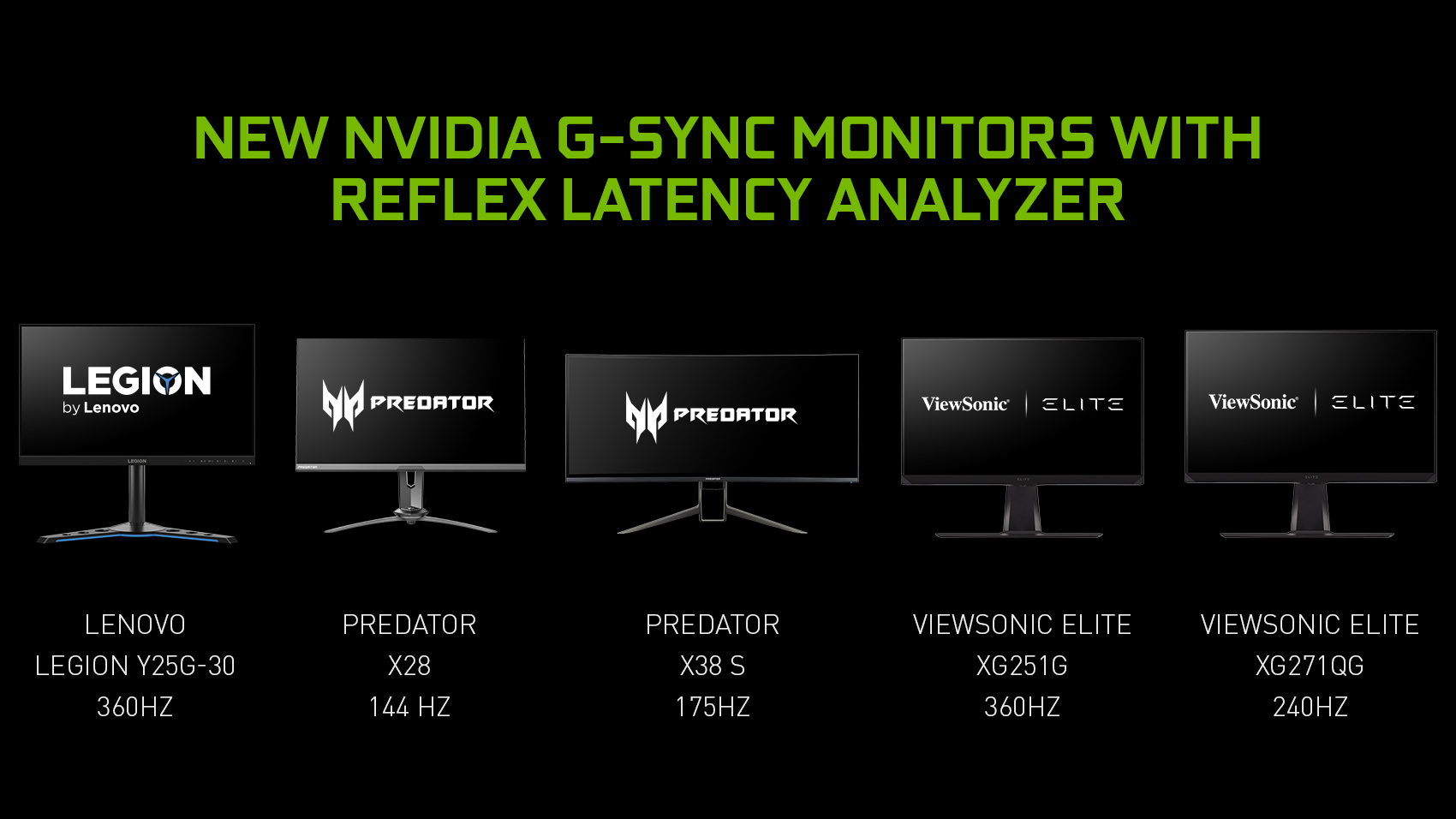 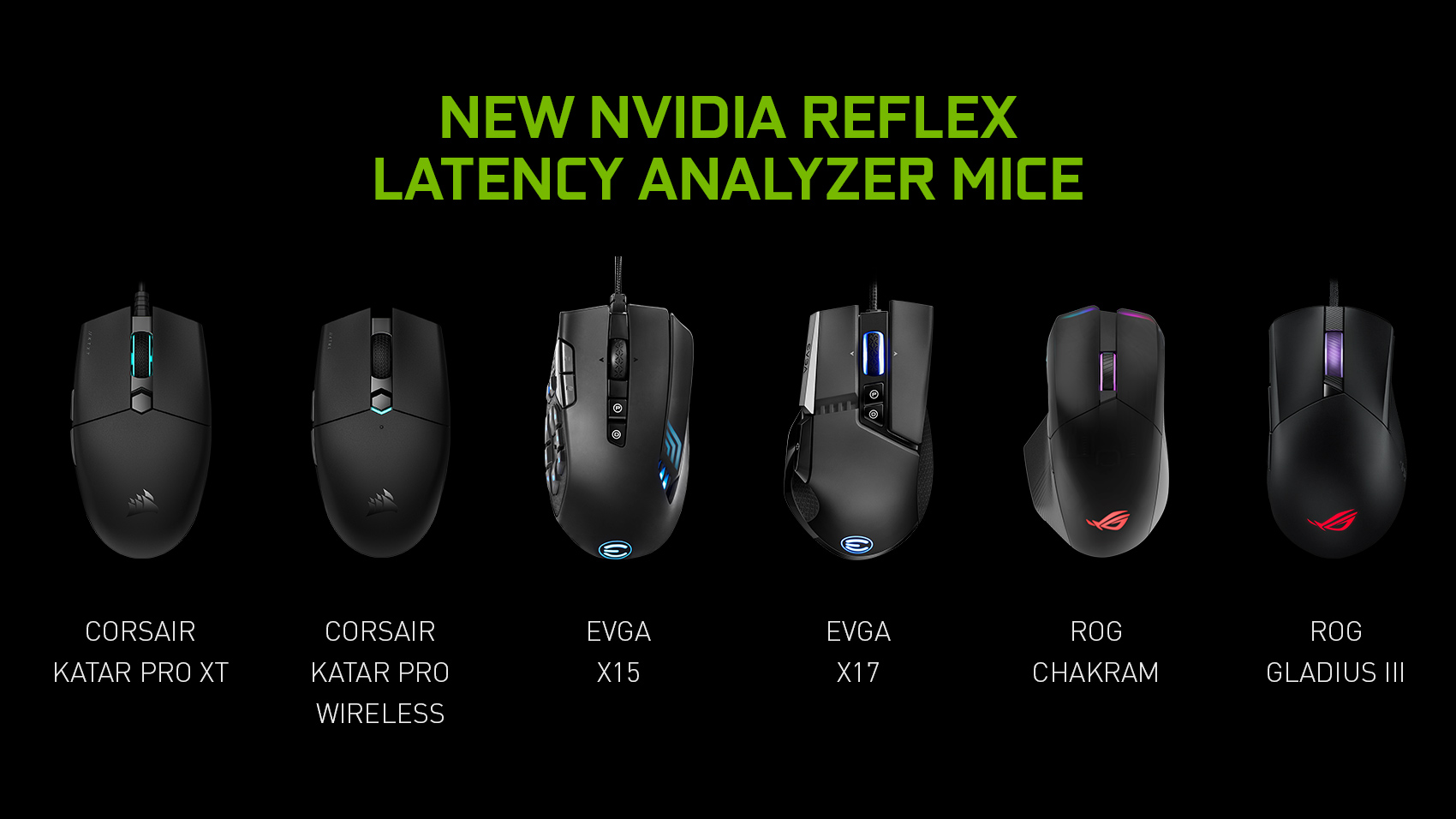 For more info on our NVIDIA Reflex announcements, check out our dedicated article.

GeForce RTX 30 Series Laptops For Every Gamer and Creator

GeForce laptops are the fastest growing gaming platform thanks to their ever-increasing performance, ever-smaller and lighter form factors, and ever-improving battery life, acoustics and thermals. Since NVIDIA revolutionized laptop gaming with the creation of Optimus and laptop-optimized GPUs, sales have continually increased, and exploded with the launch of our most recent architectures. 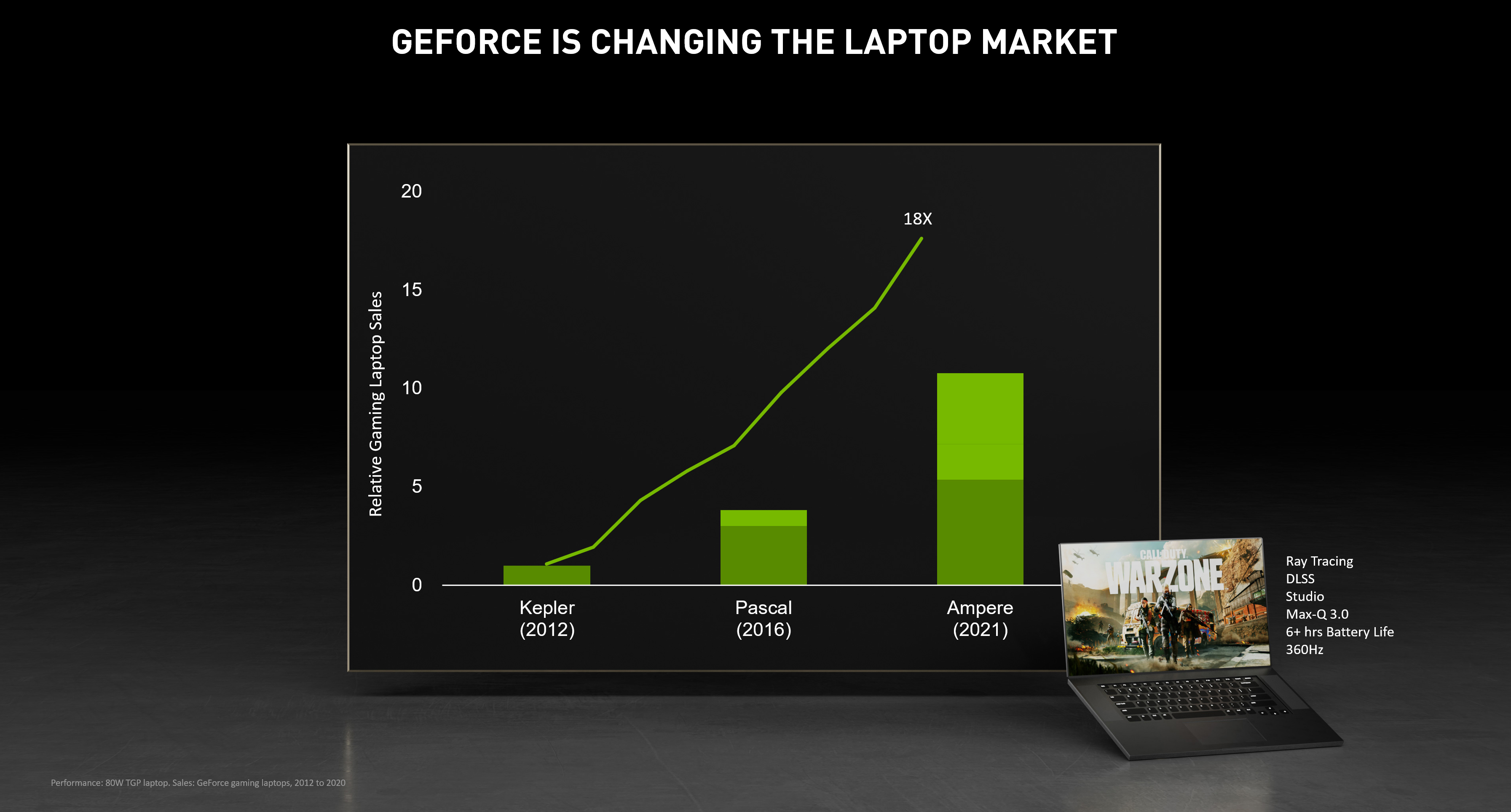 With the NVIDIA Ampere architecture, launched last year, we introduced 3rd generation Max-Q technologies, which optimize multiple aspects of the laptop’s hardware for peak power and performance, and use AI to dynamically balance resources for optimum operation. Together with NVIDIA DLSS, a game changer for laptops, performance can double in games, and in applications it can quadruple.

Gamers, students, and creators have embraced this new-gen of laptops en masse, and every major manufacturer has launched new models, giving consumers over 140 GeForce RTX laptops to choose from. 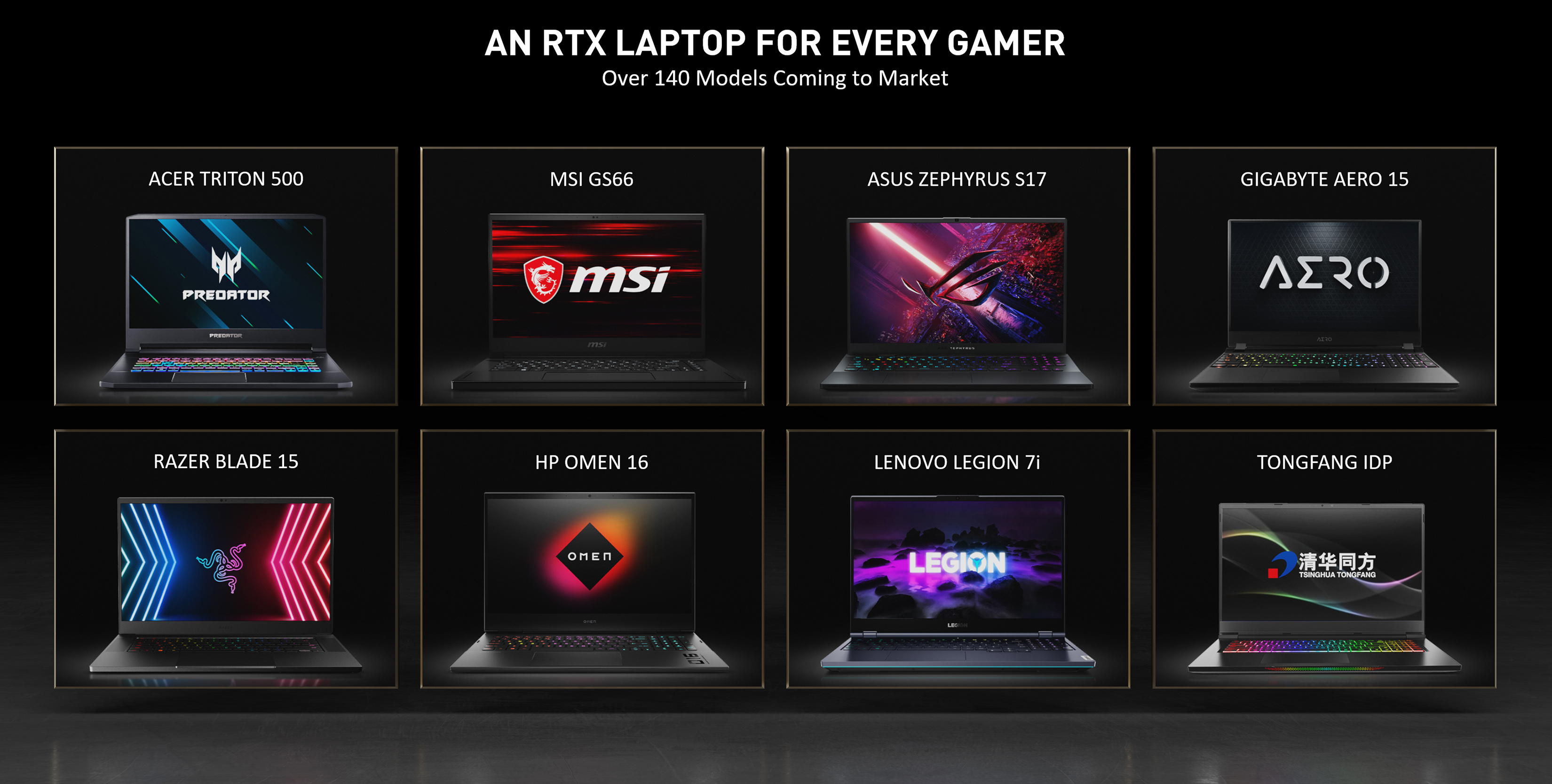 At COMPUTEX, our partners at Alienware and Acer have just unveiled innovative new gaming laptops powered by Max-Q. Alienware's x15 is an ultra-thin GeForce RTX 3080 laptop with a 2560x1440 G-SYNC display. With its impressive specs, the Alienware x15 is the world’s most powerful sub-16mm, 15-inch laptop. There's also Acer's new 16" Predator Triton 500 SE, which features a GeForce RTX 3080 laptop GPU and is loaded with 3rd Generation Max-Q technologies for peak operation and performance.

For 3D designers, video editors, photographers, and others requiring specially configured and optimized systems, our partners at HP and Acer are bringing new NVIDIA Studio laptops to market.

The 14-inch HP Envy brings the capabilities of RTX to an ultra-portable laptop — great for students and creators on the go. It will also be available with a 15-inch display and up to GeForce RTX 3060 laptop graphics in the weeks ahead. And the new Acer ConceptD series offers a variety of traditional clamshell options, and an Ezel sketch board design, to give creators even more flexibility. The ConceptD line ranges from the ConceptD 3 with either a GeForce RTX 3050 or 3050 Ti laptop GPU, all the way up to the ConceptD 7 with a GeForce RTX 3080 laptop GPU and ConceptD 7 Pro, that can be configured with an NVIDIA RTX A5000 laptop GPU for professionals. 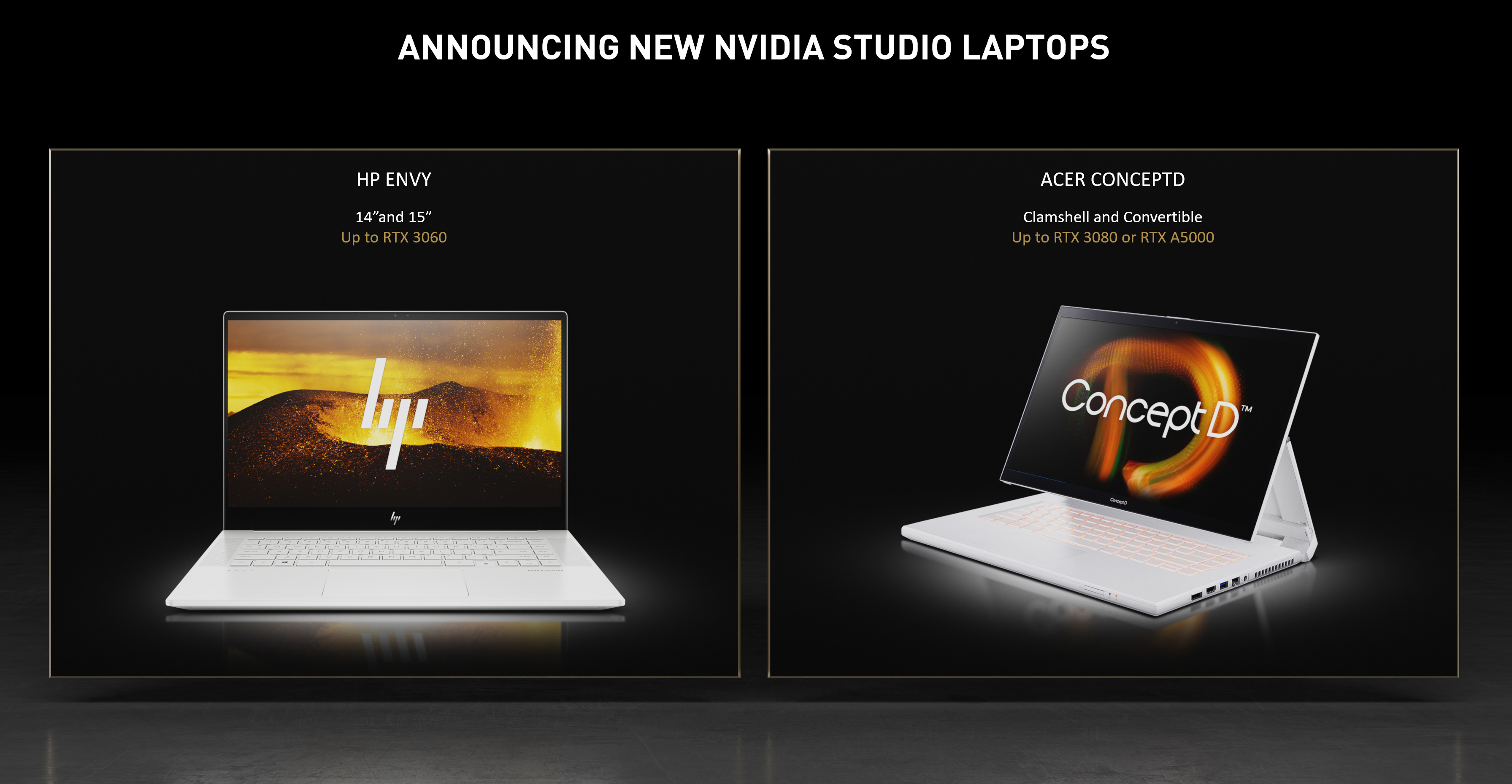 Gaming has been an inspiration to digital creators and artists for decades. Machinima, an art form started in the 90’s, uses real-time 3D technologies with game assets, visual effects, and character animation to create short, humorous clips, or full-length movies.

Leveraging the latest RTX technologies and NVIDIA’s AI leadership, we created Omniverse Machinima, an application that enables you to remix animated video game storytelling through the use of immersive visualization, collaborative design, and photorealistic rendering. 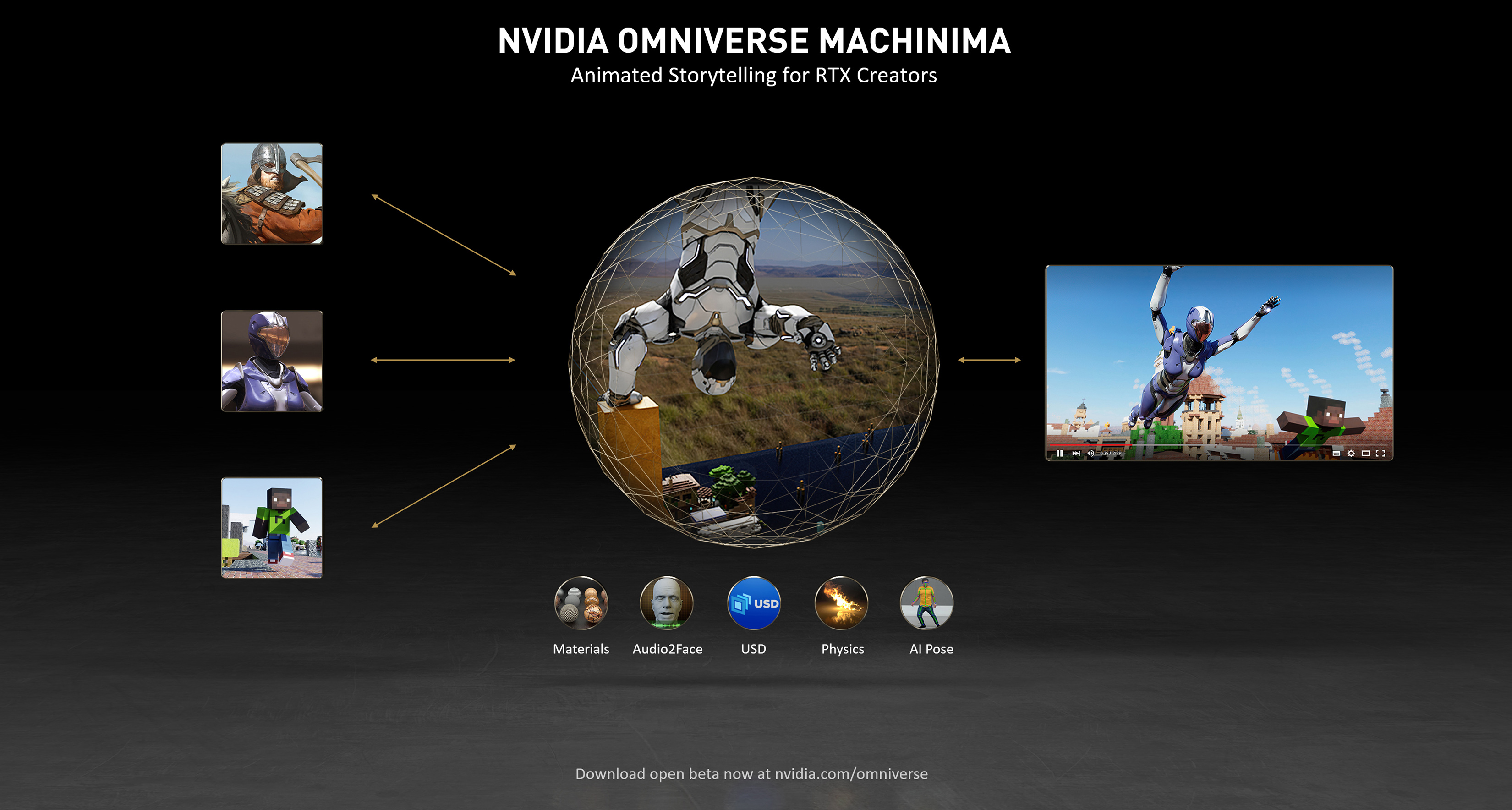 Users import their own game assets, or draw from our growing library, which includes assets and content from Mount & Blade II: Bannerlord, Squad!, and iconic NVIDIA tech demos. They can then apply advanced physics effects, like destruction or fire, with NVIDIA’s PhysX 5, Blast and Flow. Animate character movements using only a webcam with wrnch’s AI Pose. And use simple audio tracks to animate character faces with Omniverse Audio2Face.

The Omniverse Machinima Open Beta is now available to download. Try it out and show us what you can do.

Entering our Sweepstakes is easy:

Learn more about Summer of RTX on our contest page.

Since the launch of ray tracing and NVIDIA DLSS in Fortnite, we’ve worked with Creative Mode map makers to craft unique levels and experiences that are fun to explore, to play, and also demonstrate the benefits of RTX in Fortnite.

At COMPUTEX, we launched our latest map, Titanium City, from Team Beyond. Themed to celebrate the announcement and launch of our new GeForce RTX 3080 Ti graphics card, Titanium City features the new GPU as the map’s backdrop, with all the action occurring around it. What action? Well, our newest map is a 12 player Gun Game multiplayer free for all. Take a look in our trailer:

Orbx has been the leading developer of scenery mods for flight simulators since 2006. Having published over 350 products, upgrading the flight experience of thousands of simmers, Orbx is known for its high-quality and high-tech products.

Microsoft Flight Simulator is the modern pinnacle of flight sims, featuring impressive graphics, real-time weather systems, realistic lighting, and high detail environments that stream over the cloud. Aircraft, airports, cities and regions take full advantage of these features to give simmers the real world experience they were long looking for.

To install this free mod, head over to the OrbxDirect Store, create an account, and use the Orbx Central App to download and install the mod by selecting “Add to account” on the product page. Once added, you’ll be prompted to open the Freeware in your Orbx Central App. You can also repeat these steps directly within the App.

Gaming is transforming entertainment and RTX is changing everything, not just for gamers, but for over 150 million creators, broadcasters and students. With over 130 of the top games and creative apps accelerated, RTX is the new standard.

To learn more about everything announced today, and everything we’ll announce in the future, check out GeForce.com.